Medaka Box Abnormal is the sequel to Medaka Box, so if you haven’t watched that, don’t bother with this anime. As a proper sequel, it picks up where the first season ended, however, the main genre is very different from the first season. It turns the first season into a sort of lengthy introduction and puts emphasis on battles and “abnormalities” (strange inhuman abilities based on nature aspects) of individuals compared to the first season that focused on humour and SOL. Nearly every mainstream shounen does this, but this anime does it on a completely different level, what makes many people dislike it. But it isn’t serious and it never tries to be so it shouldn’t be taken seriously or people will be very let down.

That “light” feel is taken into the story as well with it being a bit cliché, while it raises very interesting questions. Is it right to be strong without doing anything for it? To Medaka and Zenkichi, two of the main characters, it’s something people shouldn’t even think about because getting stronger and suffering go hand in hand. Of course, they are bound to meet people who think otherwise. This is the first moment where people turn away from the show with rolling eyes. It’s because of how it’s handled. Surely, with Medaka being able to do inhuman deeds simply because she was born with it, she isn’t the right person to tell others that they have to suffer to get strong. 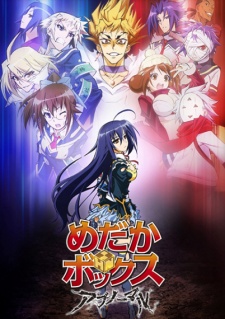 However, if you don’t turn away so fast, you’ll see that there’s much more to Medaka Box Abnormal than just hypocrisy. Here comes Zenkichi, the other lead character, who is the exact opposite of her talent wise. He might be strong, both physically and mentally, however it is mentioned, not once, that he got there by hard work and was very weak during his childhood. Unfortunately, the rest of the main characters don’t do the themes justice as most of them are “specials”; very talented people or abnormals. Of course, most of the time, they can’t rival the abnormals that are villains.

One of the biggest problems I had with the story was how all themes were presented. Medaka Box Abnormal sure deals with very interesting issues but they are usually solved by the main characters simply stating their opinion, even though villains keep asking better and better questions. The difference between the “good” guys and the “bad” guys is nothing but the way they answer them. That wouldn’t be such a problem if the show didn’t portray the main character’s opinion as the right one and everything else as wrong and it goes as far as Medaka deciding what’s right for the rest of the world (that doesn’t make her think about it even for a bit).

Art doesn’t really help its case. It might look really strange and it’s difficult to get used to it but once I did, I fell in love with it. The animation is fluent and very well done. There’s lots of fanservice but it doesn’t feel overdone or annoying because it’s usually played for laughs.

While it might look like a huge mess, and it somewhat is, most of it is done supposedly to create a comedic effect. However, not everything looks like it’s trying to parody itself. Character interactions and presentation is probably the best part of the anime. While characters themselves aren’t something to remember, their relationships and feelings are delivered perfectly. You can see how they feel about what they say or about what is happening or simply know their nature by their actions. I found this to be the best part of Medaka Box Abnormal because to me it felt more real than most of SOLs I’ve finished and it made the anime more enjoyable.

Medaka Box Abnormal is definitely not a perfect anime. It’s difficult to like because it tries to jam too many genres together and never truly focuses on one. And even when it does (for a while) it usually overdoes it for a bigger effect. However, if you do find something enjoyable about it, stick until the very end because it won’t go away easily.