The story and premise look very common. A show featuring main characters who’re able to transform themselves into superheroes with special suits and then fighting evil objects threatening the citizens of Tachikawa City and even the city itself. This foundation is the only common thing because something rather new is created on many other levels. The story starts with the selection of the main heroine Hajime as a Gatchaman. She brings up a new wind into the existing team with her extraordinary personality and different perspectives, but later more on that.

The story begins to unfold and question many main aspects of society and cooperation between human beings. In this world, a program called GALAX exists and it connects people from all over the city and world via the internet on their smartphones. Its main use consists of helping people in need by providing support from plain citizens like you and me. At first, it might seem random and fetched, but you’ll have to delve into the course of action to understand the way the characters think and act. Inevitably you’ll start to question those aspects, to question your way of living and to question the concept of society itself. This story brings a lot with it and one can only profit from watching as well as understanding the plot. 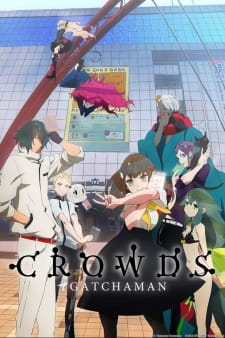 Hajime’s a really controversial protagonist. She’s one of the most genki-themed characters ever made and this is one of the main reasons you’ll either like or dislike her and the whole anime. There’re enough people that agree that no one needs a protagonist who is happy 24/7 is a pain in the ass. The crazy thing is it still works out on the base of the story, because Hajime is not acting inconsiderate or rash, but thinks about the situation and tries to change it to the better in her own way. The insane I’ll throw rainbow unicorns into your face way. Still the liking’ll stand or fall depending on the light Hajime is seen in.

Every other member of the gatchaman crew possesses a unique personality to contribute to the advance and pace of the story. Especially the thoughts of the sweet pandaman leader Paiman’re emphasized throughout the course. Likewise, the more supporting characters like O.D. or Utsutsu share their contribution and determination to help fight the bad guys. Every character undergoes his and her own development regarding the real purpose of gatchaman. Something like this is amazing on different levels.

The animation and art have a nice and clean quality and the character designs are lovely to watch. Personally, I really like the hair designs because it provides the extra eye candy and highlights the faces of each character. Each gatchaman battle suit has its own design and acts autonimously in comparison to the others. The action scenes are well animated and the colours are vibrant and pleasing to the eye. The best thing about this show’s the sound. The OP and ED songs are iconic. My bias says that the OST in this series is extremely well done. The atmosphere changes with the music being used; I personally think that’s a nice touch.

Gatchaman Crowds is an anime to love and to hate. The enjoyment is based on the appeal of the characters as well as the extent they find the story interesting. But I do think however, that it Gatchman Crowds can definitely be considered a sleeper Anime.