This anime is, in many ways, a truly unique experience. I honestly can’t say that I’ve ever seen anything even vaguely like it and that it in itself was a breath of fresh air. From start to finish, there’s a definite sense of originality that strives to remind you that this isn’t just another anime popped out from a genre mould. In fact, I’d struggle to even categorize this into MAL’s genres of my own accord. As a result, I very much didn’t know what to expect when I opened the first episode a couple of months ago and, in truth, the first episode caught me off-guard. When questioned about it, my initial reaction was “odd… but I enjoyed it”. This feeling only managed to increase tenfold.

Our story begins with, and centres around, our protagonist, Yasaburo Shimagamo, and his “eccentric family”. The first unique thing that comes to the eye is the fact that this family, despite first appearances, is not made up of humans at all. They are tanuki, a subspecies of raccoon dog. They are portrayed here as magical supernatural creatures that can transform not only between raccoon dog and human forms but also into an assortment of other beings and even inanimate objects of varying scales. In fact, our protagonist starts out this series shifted into a female form! 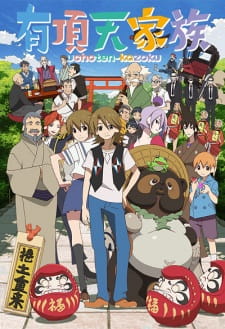 This is hardly something new in our anime’s setting, though. Here we are thrust into modern-day Kyoto, where tanuki and tengu roam openly. The humans there accept this as everyday life, seemingly unbothered by the odd goings-on around them. Despite this supernatural theme, however, the setting’s main plus is that it does a wonderful job of immersing you fully into Japanese culture. Even without explicitly turning around and telling you how Japan’s society is, you almost feel as if you’re actually there, even if your knowledge of Japan isn’t the best.

The main reason this setting comes to life so easily is the beautiful precision with which this anime is made. A unique art style with astoundingly beautiful backgrounds really brings Kyoto to life in a brand new colourful way, with the sounds of the city and an astounding score really plumping things out. Everything seems exciting and new, even in the slower scenes, with every neatly drawn yukata and floating cherry blossom petal managing to catch your eye. The transitions from the colourful fast-paced opening to the much gentler ED has the intense feeling of taking a journey with the characters, even if all you did, in reality, was watch 20 minutes of truly wonderful anime.

However, despite all these aspects, this anime would truly be nothing without its characters. Like all slice of life, Uchouten Kazoku relies on them to drive itself forward. Their main selling point is that not one of them is an archetype. The entire city of Kyoto is filled with three-dimensional people with enticing personalities and conflicting goals. There’s not much of a sense of right or wrong within them either, much like the real world, but more a sense of which point of view the anime is taking. From Yasaburo the fool to Yaichiro the responsible older brother, to Benten the mysterious lilac-haired tengu’s apprentice, there’s a whole cast of people to fall in love with. Even those portrayed in a negative light aren’t characters you find yourself disliking because they’re badly written – in fact, it’s because they’re so well written that you find yourself feeling that you should dislike them at all.

Everything about this anime just feels right. I wish it had never ended because it was truly the highlight of my week for its short one cour run. A good message, great characters, and an incredibly engaging storyline were fully implemented to realize their true potential here, resulting in an anime I’d recommend to absolutely everyone I’ve ever met.