The first thing viewers might notice is the overview of its characters and themes in the first episode. There’s that sense of nostalgia that bites back from years ago if you’ve been a loyal fan. More honestly though, this series assumes that you are already somewhat familiar with the Rozen Maiden franchise. Even if you’re coming into Rozen Maiden completely fresh, it is okay because of the material covered in this series isn’t any sort of direct continuation from its prequels. However, the experience might be somewhat lessened to a degree.

For one, we have Jun Sakurada that plays the role of the main male protagonist. Like many people, he has a talent but it turns out to be something that doesn’t fit well for his gender role. The story follows Jun and his life as a seemingly lonely man. He has an average life with an average job and no girlfriend at his age. We get to see from his point of view on the typical life of a young man whom seemingly have no particular goal or dream in life. What he does have though is a terrible experience during his middle school years. That has left a scar in his life that continues to haunt him since today with his memories.

But the real star isn’t just Jun from this show. From the depths of fantasy comes our lovely dressed doll, Shinku. She is not just elegantly dressed but also comes with a ladylike personality. Her constant demand for tea and service from Jun is often played on a joke of annoyance. In fact, the master should be Jun, not the other way around considering he is Shinku’s maker. The problem isn’t that though because Jun can suddenly deal with annoyance in his life. Rather, it’s this new twist involving a game known as the Alice Game. In that game, there are seven different dolls identified as the Rozen Maidens each with a different human partner. In order to win the game, one must steal the others’ Rosa Mystica through battle and in turn become the perfect girl known as Alice. It sounds difficult. It proves difficult. It is difficult. This is because Jun wishes to win the game without actually taking anyone’s Rosa Mystica. This task is considered impossible because it would defeat the purpose of the game. Whoever is because the scenes for this game suddenly won’t be happy. 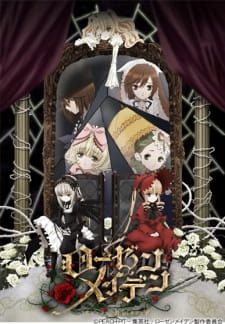 As if unhappy is a word to describe this series, just look carefully at Jun’s college life. He’s suddenly not happy about his job especially the way his store manager treats him. Not only that, he is constantly judging what others may think of him. The thoughts he forms sometimes borderlines on delusional. But who can blame him right? After all, he’s suffered a past that he hopes to never to relive again. In essence, the overall tone of this series spells out a more serious atmosphere as we explore Jun’s loneliness as a young man.

Character dynamics are explored throughout this series. There are two sides to it as well. First comes the more realistic side once again with Jun. In this series, Jun is working at a local bookstore where he doesn’t seem to be happy. The store manager always seems to play the role of a bully. In many ways, Jun feels the scars of what he has suffered in the past as in the form of humiliation. Luckily though, there’s some hope with his fellow co-worker Saitou. As someone who has a talent in the field of acting, she is sympathetic for Jun. The relationship between Jun and her is typical. It crosses between the lines of both friendships and possibly even romance. On the other side is the relationship between a human and doll – Jun and Shinku in this case. The series leaves their relationship as ambiguous. There’s a sense of annoyance, appreciation, and bonding that can be all packaged by the duo’s relationship. On the other hand, Shinku has rivals in form of antagonism towards another doll in the series – Suigintou. It can be seen as serious and comedic the same time; take it how you receive it. Unfortunately, though, there’s not much exploration of the other dolls with their masters besides Shinku and Suigintou.

Although the premise sounds interesting, there’s a sting in its pacing. What I’m referring to here are the story and its main purpose. The Rozen Maidens are designed to fight each other for the title of Alice but the premise itself doesn’t engage itself as well as one may hope. In fact, the majority of the first half adapts more of a slice of life tone that can be repetitive to watch. In particular, this relates to Jun and his life. Then, there’s a problem with the other characters as the show seems to only highlight two particular dolls for the majority of its run. The series details the Alice Game so each doll should have its purpose. Instead, though, this series only gives them a minimal amount of screen time. Not all the dolls get their own spotlight and some may feel disappointed. The sense of emotions might also not be as strong as one may hope for due to a lack of exploration in the other dolls’ backgrounds.

The artwork for the series suddenly feels a bit different. By different, I mean in terms of realism. The place that Jun is living at is designed to look very simple to give viewers an outlook on his average life. There’s not much fancy going on in his life besides Shinku. The way his character is designed also looks plain with his face and figure. On the other hand, the Rozen Maidens are designed with fashion. Shinku’s red clothes are covered with elegance and that lady-like atmosphere that matches her personality. Others such as Suigintou is designed to give off her darker personality through that lolita golita style of clothing while two other Rozen Maidens in the show have noticeable coloured eyes.

Because the show is more serious and covers a more realistic side of Jun’s story, viewers should also expect a more straightforward soundtrack. There’s no funky beat or rock style music in this show. Instead, it has an eerie like OST that often depicts a more moody side of the story. Also, remember that Jun is isolated with himself. Therefore, viewers should expect the soundtrack to also convey that feeling of loneliness. The OP song, “Watashi no Bara wo Haminasai” by ALI PROJECT gives off a feeling of mystery and possible foreshadowing as well. As with the ED song, there’s the sense of eerie loneliness once again.