The story is surprisingly good. Where the majority of anime comedies fail, Love Lab managed to go up a notch. Almost nothing in the anime happens just so “you can have a couple of laughs”. Somewhere, somehow, it all kind of ties up to the end of the story and the conclusion. It starts in a light tone which continues all throughout. Yeah, there’s some drama, but it’s not over the top. It doesn’t try to shove tears into viewers eyes or anything. It’s simply there to give more depth to already great characters.

The story follows Riko and Mika, two seemingly total opposites when it comes to … well, everything. Mika is a perfect girl, nicknamed even “Princess”, while Riko is a tomboy, nicknamed “The Wild One”. They’re both admired by other girls in the school but for all the different reason. Fate (and by fate I mean teacher) has its hands in the meeting one another and then the adventure begins. Along the way, they’re joined with some other (equally hilarious) characters and you’re bound to like at least one of them, if not all. To be quite frank, the story is not deep, but it’s extremely well executed. It’s a story about friendships and how lies sometimes make it hard. Nonetheless, everything that happens is a part of the story. It’s not just a sidetrack business trying to make you laugh. 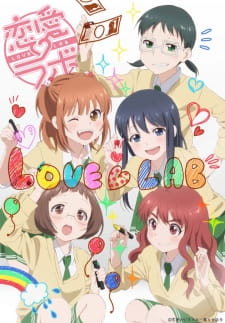 Another impressive part of Love Lab is the characters. There are five main characters (seven if you include guys), and they’re all enough unique to have their own charms and likeness to them. Mika is a delusional perfectionist who does everything on her own and wants desperately to have a boyfriend. Riko is her straight counter-part, who’s “Master of love”, and never fails to make you laugh with her comments. She’s not as smart as Mika, but you admire her for what she is. Then you have Suzune, shy and timid but equally enthusiastic about their quest to learn how to seduce boys. There’s also another duo of hilarity, Sayori and Yuiko; Sayori being composed, a seemingly cold and detached person with quirky remarks and affinity for money, and Yuiko being not-so-annoying tsundere. All of them have distinct personalities and they all bring something to the table when it comes to comedy.

You see them grow closer and closer as friends, and you actually believe in their friendship and you feel worried when it feels as if it’s going to collapse. There are some over the top moments, but most of the time it’s down to earth funny.

When it comes to the production department, it’s nothing amazing but it’s good enough looking to the eyes. Anime-only-comedy was done extremely well, and I really loved most of the expressions of the characters. They were cute when they were meant to be cute, and they were extremely ugly when they were meant to be ugly. Backgrounds were lacking but that’s to be expected from character-focused anime so no complaints there. The soundtrack was lacking as well but, from what was there, it fit solidly.