I picked up this Anime yesterday, and I finished it today. I have a lot to say about this show, but  I’ll keep it cut down. Overall, I did enjoy the Anime – but I also found it to be very frustrating too. Would I recommend this Anime to just your daily Anime viewer, uhh, I’ll probably pass on that as I feel that there is stuff story wise that can be improved. However, all that being said, I did enjoy the Anime but I am not exactly ‘hyped’ up for a second season if there is to be one. Nor do I think Yagate Kimi ni Naru is worthy of its current rating on MAL which is an 8.01. I think it’s more of a 7/10.

Story
At first, you thought you knew the story. Yagate Kimi ni Naru, is a Shoujo Ai, and School Anime. Its story revolves primarily around Yuu and Touko both of which are a part of their School Student Council. This is I would stay, anyway, where everything starts. As the Anime progresses you’d think it would be about Yuu and Touko and the growth in their relationship that hits off in the first episode. However, you’d be wrong. The story I thought had three different storylines, two subplots and one main. Oddly enough, unlike what the picture on MAL depicts it to be, the main plot isn’t about Yuu and Touko and their relationship; that is just a mere subplot. The other subplot is this “stage show” that is being planned by the School Council which starts taking place somewhere around episode 6.

The real story, I thought, was about Touko and her insecurities. Why you might ask? Well, it is because I thought that Yuu who happens to be one of the main characters, her purpose was to reveal who Touko was on the inside. I thought Yuu’s job was to look past what she saw on the outside and reveal Touko for what she really was, a lonely, hopeless, and insecure person, masking everything behind a mask that wasn’t her in the slightest. You see, later on, in the Anime, it is revealed that the reason why Touko is who she is because she grew up admiring her older sister. Who happened to go to the same school, and she too was Student Council President. She too was planning a “stage show” however, Touko’s sister didn’t get to see it come to light because of an accident that took her life.

I thought the real story was about Touko. Because of her sister’s passing, she was told at a young age to live for her sister, to become a model like her sister. It is because of this ‘expectation’, Touko left behind her own true self to become everything her sister was. This is where all the supporting cast and to be more specific, this is when Yuu comes to play. Having that relationship with Yuu allowed Touko to slowly reveal more about her true self to Yuu and why she acts the way she does. The rest of the Anime is about Yuu and the rest of the supporting cast, one of them being Sayaka – Touko’s best friend. Helping Touko accept and understand that her life isn’t just to fulfill her sister’s dreams and to be exactly like her sister, but to accept your insecurities, that it’s okay to be vulnerable to others, and to find love and compassion in things that make you happy. 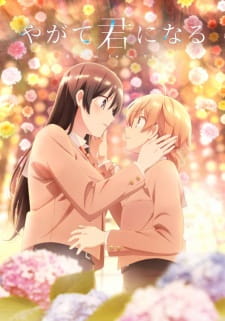 Due to the horrendous pacing, however, one can get really bored watching the Anime. Yes, there are sometimes when the conversations being had are lively, this is largely due to the fact that most conversations are accompanied by some sort of background instrumental. However, a lot of the dialogue of the Anime is very bland. Not to mention, the studio’s effort to turn the other various parts of the Anime, like Yuu and Touko’s relationship, Touko’s relationship with Sayaka, and the “stage show” into one fluid story. It was just too much going on, I often found myself getting frustrated at how the story was being presented to me.

Characters
As for the characters, as previously mentioned there is Yuu Koito and Touko Nanami. Their relationship is rather I’d say one-sided. It is because Touko falls in love with Yuu, however, Yuu doesn’t exactly feel the same way, nor does she know if what she feels is acceptable. They sort of become friends with benefits. However, like all things, their relationship develops over the course of 13 episodes and what looked to be a one-sided love, slowly turns into something that goes both ways – well sort of.

I thought their relationship was at times extremely annoying. Some episodes, their relationship would take 5 steps forward, but then 10 steps back; and instead of regaining the steps it lost, it regresses even more, before taking one giant leap back to where it was a few episodes back. Not to mention that there is the relationship between Sayaka and Touko which so happens to be a one-sided love, that being Sayaka liking Touko – but Touko seeing Sayaka as her best friend. Which complicates and creates this big one-sided love triangle.

It’s weird, the dynamic between Sayaka, Touko and Yuu work wonderfully for Touko because I thought both Sayaka’s and Yuu’s personalities were able to complement and highlight the willingness to help Touko overcome her insecurities. However, Sayaka and Yuu’s personalities clash if you leave them in a room together. Which leads me to believe that everyone’s purpose in the Anime was to help Touko develop as a character.

Art
Unlike the “Bunny Girl” Anime that I reviewed on Monday, where I felt as those the character design felt out-of-place with the background scenery they were set in. This Anime I thought was quite the opposite. The character design really fit with the background, it also felt like illustrations matched in terms of detail. The colour schemes used didn’t conflict and really blended together really well. There were many evening settings where the casting of shadows looked really good, in particular, I really liked how the sun rays acted on the different characters and their complexions.

One thing you will notice from the character design are two things, the eyes and the nose. Why do they stand out? It is because the eyes are different from what you’d normally see, they are very round and wide. They sort of remind me of the older style of Anime, where the eyes on a character would be huge. Secondly the nose. Why the nose? Well to say it simply, it reminders me of Magic Kaito and Detective Conan because the nose comes to a sharp point at the tip – something you typically see in older Anime.

Sound
The OP “Kimi ni Furete (君にふれて)” by Riko Azuna, I thought really fit the overall general pace and feel of the Anime. The song isn’t too slow, nor is it too far – not to mention the artwork that goes along with the OP and the song of choice I thought really fit and was really pretty.

What I’ve noticed from the two Anime I’ve watched this week is that the ambient noises and background instrumentals used in the background play a very prominent role in the mood and feel of the Anime. As I slowly get used to hearing such things, I’m slowly beginning to like it. It definitely brings life to conversations that could be boring without it.

“hectopascal” which is sung by the two main protagonists of the Anime. Is quite the opposite when compared to the OP. As is with all Anime. The ED is very upbeat and very cheerful and puts a happy twist on the end of each episode, something I quite like. It doesn’t feel out-of-place and to me, that is important.