Wow — it is back. It’s been awhile, yes. Today’s and tomorrows post will be similar, tomorrow I’ll cover Fall 2011. It will be very short as I have midterms to worry about. Regardless, I hope you enjoy what was my favourite Anime of  Winter 2011.

To me, I do not think this is really worth explaining as the Anime speaks for itself. For being an original Anime — meaning it’s not an adaption of a light novel or manga. It did one thing, and one thing only; that was set the standard for Anime. Especially for magic Anime, with stunning visuals, action scenes and most importantly, a great story. It’s no question why Mahou Shoujo Madoka★Magica is one of the best Anime out there and will continue to do so for a long time. 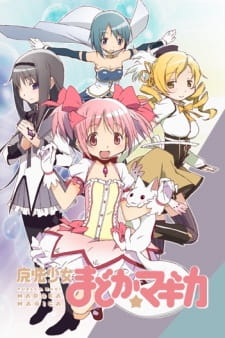 Madoka Kaname and Sayaka Miki are regular middle school girls with regular lives, but all that changes when they encounter Kyuubey, a cat-like magical familiar, and Homura Akemi, the new transfer student.

Kyuubey offers them a proposition: he will grant any one of their wishes and in exchange, they will each become a magical girl, gaining enough power to fulfill their dreams. However, Homura Akemi, a magical girl herself, urges them not to accept the offer, stating that everything is not what it seems.

A story of hope, despair, and friendship, Mahou Shoujo Madoka★Magica deals with the difficulties of being a magical girl and the price one has to pay to make a dream come true.

I love this Anime. I love it a lot. What really pulled me into Hourou Musuko was the main characters. The fact that this story is about the LGBT and the realities they face and hardships they have to face to be not only be accepted by the friends and family but also by society — really speaks to what is happening today.

Effeminate fifth grader Shuuichi Nitori is considered by most to be one of the prettiest girls in school, but much to her dismay, she is actually biologically male. Fortunately, Shuuichi has a childhood friend who has similar feelings of discomfort related to gender identity: the lanky tomboy Yoshino Takatsuki, who, though biologically female, does not identify as a girl. These two friends share a similar secret and find solace in one another; however, their lives become even more complicated when they must tread the unfamiliar waters of a new school, attempt to make new friends, and struggle to maintain old ones. Faced with nearly insurmountable odds, they must learn to deal with the harsh realities of growing up, transexuality, relationships, and acceptance.

Lauded as a decidedly serious take on gender identity and LGBT struggles, Takako Shimura’s Hourou Musuko is about Shuuichi and Yoshino’s attempts to discover their true selves as they enter puberty, make friends, fall in love, and face some very real and difficult choices.

Ah, nothing like a good romance Anime to cap off this list for today. What really pulled me in was the mystery part of the Anime — I thought that was really cool and very entertaining for me. Not to mention, it’s a romance Anime and I’m sure you all know by now I am a sucker for romance Anime.

Kazuya Kujou is a foreign student at Saint Marguerite Academy, a luxurious boarding school in the Southern European country of Sauville. Originally from Japan, his jet-black hair and dark brown eyes cause his peers to shun him and give him the nickname “Black Reaper,” based on a popular urban legend about the traveler who brings death in the spring.

On a day like any other, Kujou visits the school’s extravagant library in search of ghost stories. However, his focus soon changes as he becomes curious about a golden strand of hair on the stairs. The steps lead him to a large garden and a beautiful doll-like girl known as Victorique de Blois, whose complex and imaginative foresight allows her to predict their futures, now intertwined.

With more mysteries quickly developing—including the appearance of a ghost ship and an alchemist with the power of transmutation—Victorique and Kujou, bound by fate and their unique skills, have no choice but to rely on each other.