The story is simple – just characters interacting together and partaking activities in and out of the bookstores. Nothing much can be detailed further. There are plenty of hilarious moments from the characters which may be memorable for a while, and these show what’s true in their character. What is not expected in the anime is romance. Halfway through it, I can spot a few relationships between the characters. While they are not very developed as the story progresses, it is sweet to see how two people in one relationship interact. Of course, you may feel tired seeing similar interactions, but like I said, it really didn’t develop much. Both comedy and romance in the anime are balanced well, and nothing had overshot to break the story and hence it becoming worse. 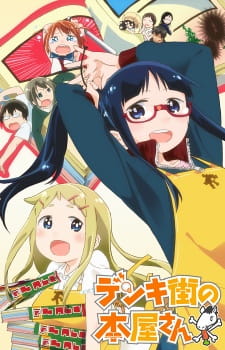 Each character in the anime is special. It might have been a typical cast of ‘slice of life’ characters, the personalities they portray is what you’d expect from that genre in particular.  They are likeable and funny, depending on how they act. Development-wise, not really much for a slice of life anime. What I thought was also nice was that the Anime kept its cast small and it didn’t introduce a ton of characters. There is a lot of anime with has a huge cast and it’s really hard to keep track of all of them. But in this anime, even with a small cast, there is a lot happening in the story.

The anime’s art is simple but not very dull. I like the colours used. It was all very bright and gave a cheery feel to the environment. I like the character designs as the characters look cute in them. The facial expressions are funny and adorable. Not much noticeable visual effects but overall, I think the atmosphere is fresh and sometimes lively, depending on the story.

The OP “Kajirikake no Ringo (齧りかけの林檎)” by Ayana Taketatsu, although is a nice song to listen to, I don’t think it really fit the Anime. The reason why I do not think it fit the Anime was that it was a slower, more calmly paced song compared to the ANime which is none of those things in my opinion. it also had this weird obsession with this apple you see multiple times in the OP, I still don’t know why that is still the case. Then comes the ED “two-Dimension’s Love” by denk!girls, which I thought was a lot better than the OP by far. Why? Because it’s sung by the characters of the Anime, and because the flaws I mentioned for the OP song, are not apparent in the ED song. It’s a faster pace, more energetic song — something I think is more interesting to listen to.