The second season wastes little time to get the viewers familiar with the main characters again. It has a small cast yet each of them stand out in their own way. The first episode has Kazuma, our well-known 16 year old hikikomori being in trouble again. With accusations pointed against him in an intimidating trial, the series wastes little time to make him look like a fool. Fans of the show should probably expect this as Konosuba satirizes fantasy drama into a comedy. Kazuma is more or less a fool although the rest of the cast isn’t off better than he is. The point is though, season 2 still knows how to have fun with its character cast. Aqua, Darkness, and Megumin all return in style with their roles. Each of them get their own spotlight in one way or another. 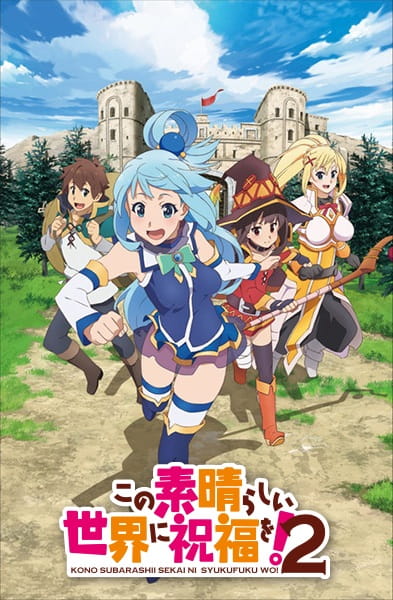 Perhaps noticeable is the presence of Yunyun, a character that anime viewers may not be too familiar with. She showed up from the OVA episode but in this second season, her role is more expanded as a rival of Megumin. What’s important isn’t just giving the audience a familiarity of her character but also Megumin as well. We learn of her past and in essence, fans of Megumin will be pleased to learn about her besides just being the girl with an obsession for explosions. In addition, the story focuses a bit on Darkness too when she gets involved with a bothersome prince. I can honestly say that without a doubt, the show knows how to make the audience laugh. It’s not just with how the characters’ roles are played out but how this series amplifies their personalities. The sequel combines elements of the first season as well and reintroduces jokes such as frogs swallowing up Aqua in comedic fashion. Oh and who can forget about Kazuma’s panty stealing talent? It’s all back in glory.

Now I have to admit, Kazuma is character that I find likeable yet repulsive. The show purposely makes him a self-serving character that can make viewers tear their hair out. Obviously, the show is self-aware about this but to be honest, how many times can you really watch such an idiot being idiotic? The other characters are also more or less the same whether it’s Darkness’ machoism, Aqua’s brutal honesty, or Megumin’s lack of self-control. Some may say that it’s because of their stupidity which makes this series entertaining. However, others can think of their lack of development as holding the show back. Regardless, the character cast supplements with the overall humor so be ready for a lot of that in the second season.

Well, this isn’t news but even before picking up the show, it’s easy to tell that the sequel’s production quality diminished. The first season didn’t have good production quality either although it’s subverted to look that way from the start. It’s like a joke for fans to make fun of regarding the art in the first place. The character facial reactions is still over exaggerated at many humorous segments with visual gags. However in terms of quality, it seems that the sequel did drop the ball more so than the first season. Of course, fan service is still pretty noticeable especially if you’re got a keen eye on Darkness. On the other hand, soundtrack and character voice acting is still generally the same. The OP and ED theme songs still has that atmospheric feel with a catchy tune to go along with its humor. Of course, character voice mannerism still retains their magic so be ready for a wild ride.

A little can go a long way! Even a dollar is enough to motivation.