Yes. Now this is what I call a great episode. Something I’ve always asked for was to know more about the pasts of our characters and today I got to […] 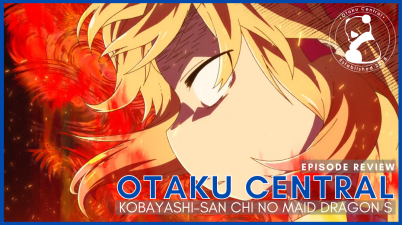 To put it simply, episode ten was laid back. A whole episode where Kanna was the main focus and you know what, it worked extremely well. As someone who loves […]

It’s another Elma, and you know what? I’m okay with that. I’ve grown to love Elma over the second season. Weirdly I think she’s the most relatable dragon, especially with […]

Once again the animation of Kobayashi-san Chi no Maid Dragon S comes through in a big way during episode eight. I particularly loved the fact within the opening ten minutes, […]

I love Lucoa’s eyes. I never thought that her eyes would have been mismatched. Could I have seen them a long time ago and not have noticed? Probably. However, since […]

The biggest thing I noticed about episode six was that to me, it showed off the other bonds between dragon and humans we have in the show. Which was nice. […]

Last night I was watching “Kobayashi-san Chi no Maid Dragon” funny moments because I was bored and while I watched these funny moments, I noticed something. I noticed that the […]

The OP is just so good. If you’re not dancing in your seat to “Ai no Supreme (愛のシュプリーム！)” by fhána, whenever you play an episode then I don’t know what’s […]

Just yes. There was no secret, Kobayashi-san Chi no Maid Dragon S was one of the most highly anticipated anime that was scheduled to air during the summer 2021 season. […]

Episode Three Thoughts My goodness, Kanna is just too good. I’ve seen many insanely cute characters, but there will always be one character that sits at the top and that’s […]